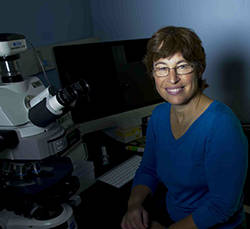 Lynn Rothschild is passionate about the origin and evolution of life on Earth or elsewhere, while at the same time pioneering the use of synthetic biology to enable space exploration. Just as travel abroad permits new insights into home, so too the search for life elsewhere allows a more mature scientific, philosophical and ethical perception of life on Earth. She wears several hats as a senior scientist NASA s Ames Research Center and Bio and Bio-Inspired Technologies, Research and Technology Lead for NASA Headquarters Space Technology Mission Directorate, as well as Adjunct Professor at Brown University, and the University of California Santa Cruz. Her research has focused on how life, particularly microbes, has evolved in the context of the physical environment, both here and potentially elsewhere. She founded and ran the first three Astrobiology Science Conferences (AbSciCon), was the founding co-editor of the International Journal of Astrobiology, and is the former director of the Astrobiology Strategic Analysis and Support Office for NASA. Astrobiology research includes examining a protein-based scenario for the origin of life, hunting for the most radiation-resistant organisms, and determining signatures for life on extrasolar planets. More recently Rothschild has brought her creativity to the burgeoning field of synthetic biology, articulating a vision for the future of synthetic biology as an enabling technology for NASA s missions, including human space exploration and astrobiology. Since 2011 she has been the faculty advisor of the award-winning Stanford-Brown iGEM team, which has pioneered the use of synthetic biology to accomplish NASA s missions, particularly focusing on the human settlement of Mars, astrobiology and such innovative technologies as BioWires and making a biodegradable UAS (drone) and a bioballoon. Her lab will be move these plans into space in the form of the PowerCell synthetic biology secondary payload on a DLR satellite, EuCROPIS, scheduled to launch in July 2017. She is a fellow of the Linnean Society of London, The California Academy of Sciences and the Explorer s Club. In 2015, she was awarded the Isaac Asimov Award from the American Humanist Association, and was the recipient of the Horace Mann Award from Brown University, and has been a NASA Innovative Advanced Concepts (NIAC) fellow three times, most recently in 2018. She frequently appears on documentaries, tv and radio, and lectures worldwide, including Windsor Castle, Comi Con and the Vatican.

Retrieved from "https://centre.santafe.edu/origins/w/index.php?title=User:LynnRothschild&oldid=461"
Category:
This page was last edited on October 21, 2018, at 01:55.
Privacy policy
About Origins
Disclaimers