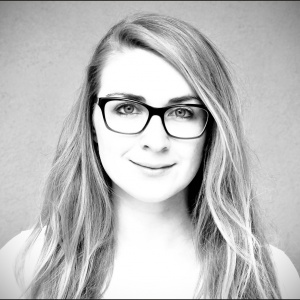 Caitlin McShea is Director of the Santa Fe Institute’s InterPlanetary Project, host of the Alien Crash Site podcast, illustrator and editor (along with SFI President David Krakauer) of the InterPlanetary Transmissions Volumes, published by the SFI Press, and one half of the space-musing duo Atlantis. She coordinates SFI's public events, including our prestigious Community Lecture Series. She manages the James S. McDonnell Foundation-funded research track on Complex Time, the National Science Foundation-funded research track on Life's Origins, and general cultural outreach for the Santa Fe Institute.

Caitlin studied evolutionary biology and philosophy at Southwestern University, and earned a Masters in Liberal Arts from St. John’s College. For six years, she directed two contemporary art galleries before joining SFI. She is enamored by creativity: its inevitability, its irrepressibility, and, most curiously, its origin. When she’s not thinking about creativity, she is employing it – usually in the kitchen. When she’s not cooking, she's likely to be found sitting at the copper bar of the Shed, or curled up on the couch with her beautiful dog, Sullivan, re-reading Gabriel García Márquez.

Retrieved from "https://centre.santafe.edu/complextime/w/index.php?title=User:Caitlin_McShea&oldid=5647"
Category:
This page was last edited on December 1, 2021, at 18:37.
Privacy policy
About Complex Time
Disclaimers