Difference between revisions of "Irreversible Processes in Ecological Evolution/Higher-order interactions, stability across timescales, and macroecological patterns"

The difficulty of reconciling the staggering biodiversity found in tropical rainforests with classical theories of resource partitioning has led ecologists to explore neutral theories of coexistence, in which all species are assumed to have the same physiological parameters, and variations in species abundance arise from stochastic fluctuations. Here we propose a theory of coexistence in which all species have different physiological rates, and interact with each other through a network of competitive interactions. We show that our models produce robust coexistence of many species even when parameters are drawn at random. Importantly, the dynamical stability of our models is due to higher-order interactions — interactions involving more than two species at a time. Moving from deterministic to stochastic models, we find that the presence of higher-order interactions, which make ­equilibrium points attractive, dramatically increases the time to extinction in isolated ­systems, allowing for the prolonged coexistence of species. When we let the system evolve, we recover many empirically observed macroecological patterns.

Connection between population dynamics and strain diversity. What is the response to pathogen intervention? (clear in a Chessonian framework, unclear when there is strong strain diversity). 1) Rotavirus. Robust antigenic diversity. Estimate of the parameters from cases: G-type strong specific immune response, P-type strong general immune response (concern: very few data, enough statistical power). Surprising: no effect of vaccine/intervention. 2) S. pneumonia. Frequency of strains. How does frequency change after intervention? Replicator model, predicted fitness from genes (how? Not clear): can predict frequencies after intervation (which again does not work). Questions: 1) what determines the equilibrium frequencies of genes? Why loci are under negative frequency negative dependent selection?

Stochastic open competitive communities. Niche/unique opportunities/deterministic forces vs chance/neutral/stochastic forces. Finding niche differences is a challenge. Stochastic Lotka-Volterra on 1dim niche axis . Cluster emerge. 1) Metric. What is a good measure of clustering and how is that affected by different mechanisms? 2) Data. BCI and regional pool.

Gipsy moth & virus/fungi. Inference of parameters from time-series. Key ingredient: variability of susceptibility between individuals. Works in reproducing data (but it is hard to predict)

Hyper-diversity of microbial communities. How do we interpret that diversity? Patches of organic matters (~detritus) are hotspots of diversity: multiple species are recruited. Lab experiment: biopolymers, 100 species. -Omics + culturing + phenotyping in order to recostruct dynamics. Observed successions (are true successions? Can also be explained by variability in growth/dilution rate). How succession depends on niche-breadth? Idea: niche breadth is bimodal (small niche breadth: early colonizers, specialized. Large niche breadth: late colonizers, cannot be grown in culture). He then looks at the metabolic networks: close to the central metabolism everything is more homogeneous, close to the periphery everything is more heterogenous (high variability in copy number). He then plots #of chitinases vs the # of coevolved modules. Early colonizers are high in both. Late colonizers are low in both. Free loaders have high # of coevolved modules but low #chitinases (can eat what free riders eat). Ecological dyanmics is consistent with this classification (degraders grow initially and then decay, cheaters and cross-feeders grow later) 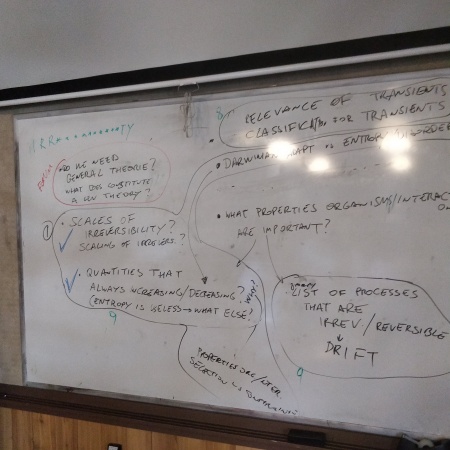 1) Identify quantities that are always increading or decreasing.

(side questions: why? At what scale (temporal, spatial, ...) do they have that trend?

Possible examples (in a Markov chain): return time (as a measure of irreversibility), turnover time, how often the system returns to the original state, fraction of trajectories that go from A->B vs from B->A. 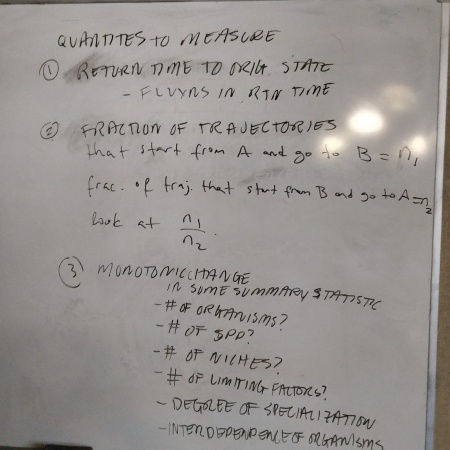 2) List of properties that we expect to be reversible/irreversible

Debated: drift, mass exctintion (in what sense they are irreversible) 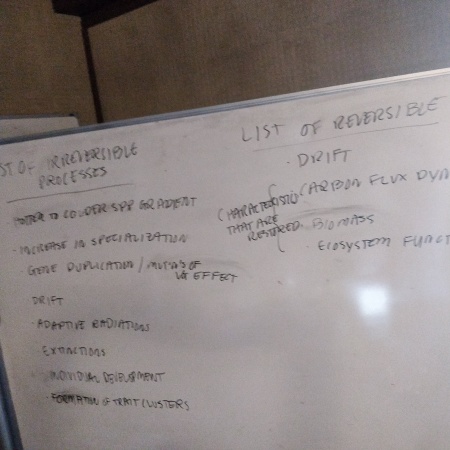 It depends on the timescale of evolution vs population dynamics. 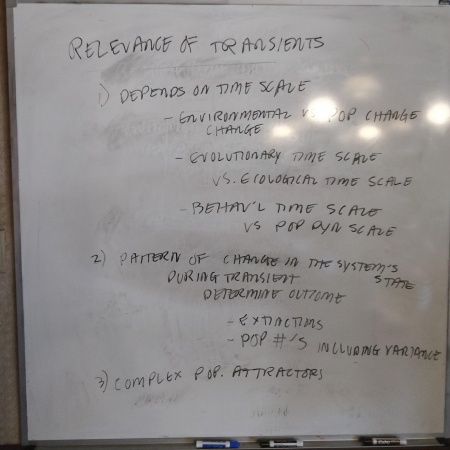 Retrieved from "https://centre.santafe.edu/complextime/w/index.php?title=Irreversible_Processes_in_Ecological_Evolution/Higher-order_interactions,_stability_across_timescales,_and_macroecological_patterns&oldid=3730"
Category:
This page was last edited on January 28, 2019, at 04:05.
Privacy policy
About Complex Time
Disclaimers