Difference between revisions of "Population and the Environment: Analytical Demography and Applied Population Ethics"

Log in to add or edit your own meeting material
Edit 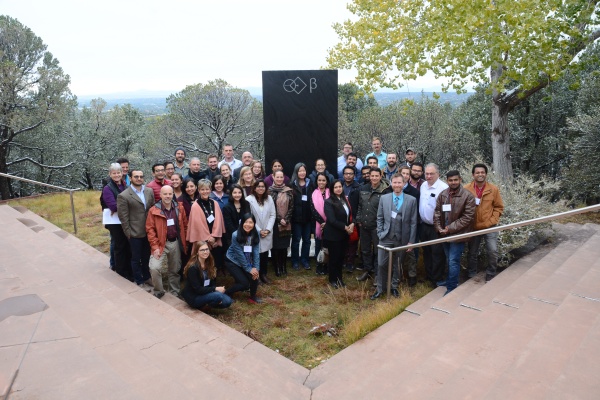 To advance science education in rigorous approaches to population and the environment, this event will bring together experts from diverse fields. In the first 2 days—the working group—the invited instructors will collaborate to synthesize knowledge in the area of analytical demography and applied population ethics, and develop a curriculum targeted at a multi-disciplinary graduate-level audience. In the second 2 days—the short course—the instructors will work together to teach the newly developed curriculum to a group of participating students and early career scientists.

<meta charset="utf-8">The relationship between human populations and the environments that support them may be the most significant issue bearing on our descendants. Yet rigorous treatments of this relationship, and its implications for applied population ethics, are regrettably sparse.

To advance science education in this area, this 4-day event will bring together experts from diverse fields. In the first 2 days—the working group—the invited instructors will collaborate to synthesize knowledge in this area, and develop a curriculum targeted at a multi-disciplinary graduate-level audience. In the second 2 days—the short course—the instructors will work together to teach the newly developed curriculum to a group of participating students and early career scientists.

Reproductive choices have economic implications for the family. This lecture will present an overview of contemporary fertility rates in rich and poor nations and identify economic explanations for the enormous difference between them. The idea of a global population enjoying a comfortable living standard while not further damaging the biosphere will be sketched numerically.

Human activities are often seen as detrimental to biodiversity. We will explore the science and sociology behind this narrative. We will both delve into the math behind extrapolations of species diversity and loss, and illuminate the shortcomings of the false dichotomy between humans and nature. Predicting biodiversity loss in ecology and conservation biology has historically been viewed through the lens of direct population destruction, habitat loss, and climate change. Habitat area has plays a key role in biodiversity theories as area mediates population size and is affected by all forms of habitat destruction including climate change. Thus we will focus heavily on theories of how biodiversity responds to changes in area. Predictions of biodiversity loss have failed to consider biases scientists bring to such predictions. We will therefore explore how presumptions about species interactions and human-nature relationships, largely dating to the Victorian era, have limited insight into biodiversity dynamics and conservation.

While the dynamics of individual populations living in a single location can be hard to predict, it is worth noting that macroecological predictions often lend simple and reliable predictions at appropriate scales. These perspectives typically focus on the constraints imposed by energetics both across species of different size and across various environments. I will focus on two case studies that illustrate the importance of integrating energetic optimizations with local resources. First, I will show how energetic approaches to mammalian physiology are capable of predicting steady-state populations based on body size. Then I will show how broad-scale population biogeography in plants can be predicted from local resources combined with the energetics of plant metabolism.

Due to tight coupling between human population dynamics and their local environments, preindustrial societies—particularly ones on islands--are useful for studying population-environment interaction.  In Hawai’i, rapid human population growth and sophisticated social stratification took place before European contact, in the context of sometimes extreme environmental variability.  These phenomena define questions, inform the structure of quantitative models, and guide the development of further hypotheses regarding how environment and population interact. I describe how agroecological and environment-dependent demographic models can be developed and integrated to probe the environment-population dynamics of a dryland field system, and to investigate the consequences and possible causes of social complexity. Results suggest that dynamic incorporation of social change could be an important component of studying population-environment interactions.

Caroline Bledsoe (Northwestern Univ.) - Co-evolution of population and environment - perceiving climate change and its impacts on reproduction and migration[edit source]

Among the biggest puzzles in studies of climate change is why so many people support policies and politicians that appear to undermine their own best interests.  These have been identified across the world, including in the US, where advocates for science in climate studies and action find themselves locked in battle with climate-change deniers.  While these things can be addressed under classic rubrics of rationality, questions of meaning, nature, and what we tend to take for granted are equally important.  Through what cultural frames – whether expressed through local, international, legal or scientific idioms – can we best grasp how people are responding to what we might see as dangerous climate change and the best solutions to it?  While easy answers to these questions are illusive, findings from analogous studies – child fosterage, Western contraceptive use, and migration from West Africa to Europe and the US – may be brought to bear to address some of the principles on which they seem to rest.

How should we compare states of affairs that differ in not only the identities and qualities of life of those who comprise them, but also in their populations? This is the central challenge for moral philosophers working on population and future generations. I introduce the key ideas and arguments. I focus on the ‘repugnant conclusion’: the view that large populations of people with relatively low qualities of life may be better than small populations with relatively higher quality of life. I explore some of the arguments for and against this view and sketch the range of positions that those who wish to avoid it have adopted.

The 1994 International Conference on Population and Development reaffirmed the language of rights in the sphere of family planning and reproductive health. But, to insist that the rights of individuals and couples to decide freely the number of children they produce trump all competing interests, is to minimise the rights of all those (especially future people) who suffer from the environmental externalities that accompany additions to the population. More women today than ever before are using modern methods of contraception, but there still remain over 200 million women with an unmet need. The global indicators used to monitor progress in family planning have rights at the heart of them. But the survey responses used to estimate the indicators are influenced by socially embedded preferences. It has been well documented that family planning services brings many benefits to those who use them. By focusing on externalities, we see that they bring benefits to others as well. Those additional benefits should be included in the design of social policies.

In this lecture/discussion we will define and discuss four primary causal models for the demographic transition and especially the remarkable changes in fertility that have accompanied it, aiming to understand how the transition to industrialization and associated changes in economic systems, technology, culture, and the marriage market have motivated people around the world to reduce their fertility. We will discuss research comparing causal models, examining both the contrasts and synergies between them. We will also briefly discuss the remaining gaps in our knowledge of the demographic transition and fertility decision-making.

Proximate natural resources are central to rural household economies in many regions of the Global South. In rural South Africa, for example, gathered reeds are used for market-bound mats or rugs, edible herbs are collected for evening meals and fuel wood is a critical energy source. Yet changing rainfall and temperature regimes are altering local environments, thereby challenging natural-resourced based livelihoods in many areas. One adaptation to such environmental challenges is migration as households either relocate entirely or send a member elsewhere in an effort to diversity income sources. The use of migration as a livelihood adaptation has been documented in a wide variety of contexts ranging from Indonesia to Ecuador, from South Africa to Mexico and this presentation reviews that scholarship. We also review several theoretical perspectives often brought to bear as well as common methodological approaches and critiques. A final examination of research and policy needs structures a conversation about next steps.

This lecture will begin from the classical roots of life tables and age structured populations, develop the general principle of stable age distribution, and close with a brief discussion of population momentum when parameters shift (as due to the implementation or relaxation of the one-child rule in China). There will brief mention of density dependence of birth rates, a concept of primary relevance for non-human population.

Summary statistics such as the mortality rate, birth rate, or Total Fertility Rate can be useful for understanding some basic characteristics of a population. Often, however, we’re interested in having a more detailed understanding of how demographic events—fertility, mortality, or morbidity—relate to individual characteristics or environmental conditions. One may want to ask questions such as: Does education predict fertility, controlling for wealth? Does infant mortality vary with proximity to clean water, accounting for household-level differences? Does the interval between births depend on a parent’s age, economic strategy, or social network? This session will introduce a number of statistical models that are useful for answering these kinds of questions. We will discuss generalized regression models (customizable to model yes/no outcomes, count data, or continuous variables) as well as survival analysis (also called event history or duration analysis). These models allow us to estimate demographic rates as a function of multiple predictor variables, control for confounding variables, and take into account individual- or group-level heterogeneity.

To preserve a record of this short-course, I'd like to ask everyone to write a short reflection on the following:

Summarize the most useful thing you learned in this short-course.[edit source]

How you are planning on using the knowledge you gained from this short-course in your own work?[edit source]

It's clear that an extended version of this course should include treatment of inequality (and more generally the distribution of the benefits and costs of environmental impacts within societies) and conflict between and within states. The #1 highlight is of course the group of people assembled here.

Retrieved from "https://centre.santafe.edu/complextime/w/index.php?title=Population_and_the_Environment:_Analytical_Demography_and_Applied_Population_Ethics&oldid=1609"
Category:
This page was last edited on August 10, 2018, at 19:19.
Privacy policy
About Complex Time
Disclaimers